In the the late 1950s through the late 1960s most people I knew who traveled, other than by car, did so by train or bus.

My family did both, but we mostly traveled by train. By age seven, I had traveled alone in the summer to visit my mother's family in Virginia. My mother had gone back to work when I was five, and I was too young to be left in the care of my sister who was three years older. The last summer I spent in Virginia, I was twelve years old.

Only rich people flew in airplanes -- which was a glamorous way to travel and took them to far-away places like Disneyland or Europe. I don't know that I knew anyone who flew when I was a child, and I took my first airplane flight when my brother got married in Connecticut in 1980. I was 28 years old.

In 1963, my aunts gave my sister and me "train cases" to carry our personals back and forth on our train trips. We were so stoked that summer that we carried 'em everywhere we went. My sister at far left -- my adorable self left. :)

These train cases, hard little leather square boxes with flip latches, opened to a mirror, adhered to the inside top of the case, had a soft, quilted interior with ruffled pockets for storing toiletries.

My sister's case was a pastel pink, and mine, a baby blue.
I loved that case. :)

Train travel, much more enjoyable than by bus, which had no room to move around, featured cool toilets and allowed movement about the coach by single passage aisles.

We could also have seats facing each other, which allowed us to ride backwards. Totally awesome! A drawback to all train seats were the rough upholstery, the nappy fabric left its imprint on the bare legs or face, if I fell asleep against it.

When the train was en route and moving sometimes as fast as 70 miles an hour, the adventure for us kids was to chase each other between the coach cars, also called passenger cars. Probably a dangerous activity and not encouraged by the conductors, we made up reasons to go to the train toilet -- so that we could cross between the passenger cars for scary fun.

I'm not sure how much our parents suspected that we made up reasons to get up out of our seats and move around, but they had four children --- at some point, I guess, they conceded to our need to move about -- I'm not sure how many times they actually allowed it, but enough for me to remember the trembling nervousness of going from car to car.

When we opened the door to move from car to car, we stepped out on an open air platform with a mesh, wire bottom, where if we looked down, we could see the laid out tracks moving quickly beneath us. The platform was shaky and rickety, and the steps on either side, blocked with a hooked chain from side to side, prevented passengers from inadvertently falling to the tracks or even resting on the steps at all when moving between cars.

This open air platform was also a popular place for smokers to light up -- either discreetly as a closet smoker or out of respect for their fellow passengers. I even think there was a smoking car, also called the lounge, which allowed passengers to smoke freely and allowed them to enjoy an alcoholic drink to complement the smoke.

The lounge car also served Coca Cola and ginger ale at thirty-five cents a glass, a luxury that I never enjoyed. These fizzy drinks had "crushed" ice. I loved crushed ice. LOL

We, of course, being the children of Depression survivors, did not partake of the lounge or dining cars. We took food with us -- sandwiches, wrapped in wax paper, Nabs, and fruit that we carried on the train in brown bags, and we got water from a packed thermos or the drinking fountain on the train. Those bags always reeked of rotten fruit in a few hours -- its pungent smell mixing with the other odors of the train -- sweat, dust, and machine.

We moved between cars just so we could dare each other to move to the steps, especially if the train were lurching or swaying or rattling, which it always was. We had to yell loudly at each other when passing between these because the noise of a train with its electric turbine locomotive, pistons, cylinders, and valves putting out psssssing noises, and the steel wheels hitting the steel tracks was pretty deafening.

In order to move to the next car, we did a little leap. Not that far -- but definitely dare devil like. 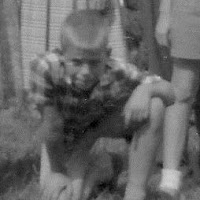 I remember having to really build up the courage to make that leap -- a leap my brothers easily pulled off. (See picture of my fearless brother Kenneth at right -- that face makes me giggle).

I remember on more than one occasion that the whole family traveled by train to see my grandparents in Virginia. 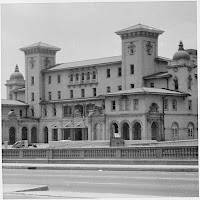 In 1964, when my grandfather was ill, our family only had one car.

When my aunts called to tell my mother that he was near death and perhaps "not live" the night, we rushed my mother to Union Station (pictured at left) in Atlanta to take a train to see him. (In 1972, the city of Atlanta razed Union Station to make way for a more progressive era and left the lone Brookwood Station to the north for train travel.)


My grandfather died before my mother arrived, a timing that haunted her later -- my dad, siblings, and I followed a day or so later, also by train, to attend the funeral.

I'm not sure why we took the train -- maybe because our car was unreliable or because my dad had hurt his back -- maybe it was the hurry to get there -- but I remember the trip well.

We took a night train to Virginia; Daddy moaned each time he moved or the train lurched, which it often did, throughout the night.

He sat up the whole way as he couldn't move well, and I lay across from him on two seats, unable to sleep with the excitement of the trip and the idea of my grandfather's death.

My grandfather, an old man as I remember him (79 when I was born), was deaf as a post, and when I visited him, offered me sardines and Saltines for breakfast. Gross!

He was an formidable figure, hardened by a long life as a farmer, who when he moved to the city took ten-mile daily walks to "stretch his legs."

The train wasn't crowded so we each had a double seat to ourselves, and I know that we ran up and down the aisles and took turns using the restrooms just so we could flush the toilet and see the waste and water hit the tracks below. Mostly, we flushed water.

Of course, they quit allowing trains to deposit the waste along the tracks, but then, the world was a little less concerned about the environmental hazard.

The only time we couldn't flush the toilet was when the train was in station. We obeyed the rules, but I remember standing on the platform on occasion, perhaps waiting for a family member to alight, while a train was stopped and hearing the water splash. 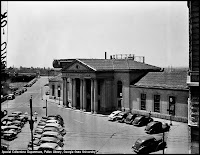 It may have stopped more than that -- but it never stopped for long and had a steady clip.

Many times we went to the station to pick someone up and ended up sitting and waiting for the train to arrive. It was okay with me as train stations were lovely buildings with interesting people to watch and tons of phone booths to check out the coin slots for change, left behind by a harried traveler.. .. or even to sit in with the door closed and pretend to have someone to call. I hated it when we found out the train was so late that we returned home to wait it out. I liked waiting inside the cavernous building that was Atlanta's train station.

Lynchburg was close to 500 miles away -- so the trip was long -- and the trips relatively uneventful at night when little could be seen from the windows.

I know that I used to rest my head against the cool of the window and wonder about the lives of the few lights of houses I did see.

Train travel seemed romantic, adventuresome, and fun ... with lots to stimulate the imagination.

When we pulled into the Klemper Street Station in Lynchburg, Virginia, and my Aunt Eleanor met us with the car, I 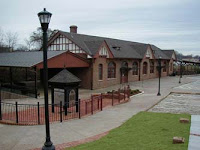 remember her saying to Daddy, "We can't believe that Papa's dead."

I loved how my aunts and mother called him "Papa" as if he were some literary figure, father to more than them.

When I took that train trip, I am sure that I packed my baby blue train case with silly things that a nine-year old girl would need for her grand papa's funeral -- perhaps a comb, barrettes, a small package of Kleenexes, and buffalo nickels. I don't imagine that they held much -- but now, when I look back, the train and the train case packed a lot of memories.