Taking out the Trash and other Kitchen Traumas

Those of you who read my blog know the makeup of my family. I am the youngest of four, and my mother in order to maintain a decent semblance of good housekeeping in a house full of messy children elicited our help. In other words, she made us help.  She divided the house chores among all of us, and she had expectations for how those chores were done. We worked in the yard, did our own laundry, grocery shopped, and, of course, cleaned house -- which included taking our part in cleaning up after meals.

When I was in elementary school, my mother went back to work full time as a dietitian [what we now call a nutritionist]  at Grady Hospital in Atlanta.  At each week’s end, she planned the menus for “supper” for the upcoming week [written in her illegible scrawl in a stenographer's pad] and made out the grocery list.

When my sister Margaret and I came home from school each afternoon, we cooked the meal from her plans {frozen fish baked in the oven, cubed steak fried in an iron skillet, corn beef and cabbage boiled into oblivion}. In those days, mother defrosted frozen meats by leaving them out on the counter all day oozing and dripping their juices [so barbaric by today's standards -- no wonder I can't do math]. By the time my sister and I got home from school, the meat would be ready for cooking. The bulk of the cooking responsibility went to my sister who was older and more capable.

After dinner, my mother expected us to do the clean up. 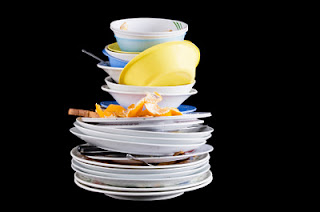 These chores, for some reason, *rolls eyes* caused much infighting and feelings of being put upon.

We did it --- reluctantly and poorly, I’m sure.

In order to ease “too much” cooperation among siblings and to expedite the process, my mother divided the dinner clean up chores into four areas -- four of us, four jobs:

1. Table and chairs
2. Counters
3. Washing and drying
4. Sweeping the floor and taking out the trash

We found all of these jobs annoying if not downright intruding on our lives. A formidable taskmaster as indefatigable as a battle ship, my mother nagged and hounded us until we acquiesced, no matter how long it took. She did it nightly, standing behind us as she could take on anyone and outlast them. I now know that she could have done all the clean up in half the time it took her to get us to do it, but...she was raising us to take care of ourselves --- in all ways. :)

As I grew older and became more aware of all the sacrifices she made for us, she did come behind us, sometimes late at night, and make sure that the kitchen was cleaned to a level  [much higher -- rewashing pans, wiping down the counters more completely] so that none of us would die of botulism, salmonella, or other painful deaths associated with poor kitchen hygiene.

My siblings and I share a collective childhood memory: barely out of diapers and not even able to speak in complete sentences, we each remember standing on a stool in front of a sink full of hot sudsy water and dirty dishes. Traumatic, huh? We used to say -- we washed dishes right after we learned to walk.

Another memory that brings us bouts of laughter about the nightly cleaning up of the kitchen is one, we swear is true, of my oldest brother Hunter cunningly calling out first at the end of supper: “table and chairs,"a claim to the job perceived to be “the easiest” of the four ones designated by my mother.

I don’t know what the protocol was for who got to say first what he wanted to do -- but ingrained in my and my other siblings’ memory is that somehow Hunter got the easiest job. Every time. I’m sure it’s some kind of intuitive jealously that went along with his being the oldest and somehow more privileged in our eyes.

“Table and chairs” by definition meant clearing the table of dishes, wiping down the table and the chairs that sat under it,  and then being done.

We viewed it as the dream job of cleaning up.

The second best job,"counters," involved clearing and wiping down all counters. Containing only a single aisle, our kitchen was tiny, especially in terms of today's kitchens, but we did have a walk in pantry. On one side sat the sink with a short counter on either side, and on the opposite side, a longer counter between the refrigerator and stove was used for food preparation and storage.This counter space got ridiculously messy with the detritus left over from getting a meal ready.

Of course, the two worst jobs [and the last two that could be completed]  were washing and drying and then sweeping the floor and taking out the trash. So, if this was my chore, I had to wait till the others were through before I could complete mine.

It was a Communist set up, but it was one that my mother found worked because it divided [not evenly in my humble opinion] but into four distinctive jobs.

The job I hated the worst and which I seemed to get the most, of course, was sweeping the floor and taking out the trash. It was the last job of the cycle and usually completed at dusk or when it was just starting to  get dark -- the spookiest hour of the day.

Taking out the trash was the last of the last four jobs; the trash, wet and gross, dumped into paper bags [before garbage disposals] and handled with as little body contact as possible, had to be taken to the outside pails. I did this job, I'm pretty sure, more than my share.

The location of said garbage pails lay inside the backyard fence at the end of the driveway; in order to get there, I carried it out the back door, where the dim back porch light barely lit the dark, down the eight  steps, and around the corner of the house to the pails. In the middle of that trek, the eerie light from the back picture window made Venetian blind crazy patterns on the grass.

Even though I walked the trash out, the return trip was different. After lifting the lid on the garbage can and dropping the paper bag with a dull thud, I looked over my shoulder fully expecting the boogey man. In anticipation of him, I ran like a fool back around the house, up the steps, and slammed the door behind me, breathless, but safely back in the hum of the house.

Taking out the trash was such an irrational fear...

but it was one of many I had as a child:

stepping off the bed in the dark to turn off the over head light,
allowing my hand to dangle below the bed rails,
sleeping with the closet door open,
crawl spaces,
the trunk of Halloween costumes in the attic,
the coal furnace in my aunts' house basement,
my aunts' basement,
and the recurring childhood dream of Ced Gunter's daddy cutting off the head of a witch.

And all that, my blog readers, is the stuff of another blog. :)