In Gratitude for Eleanor 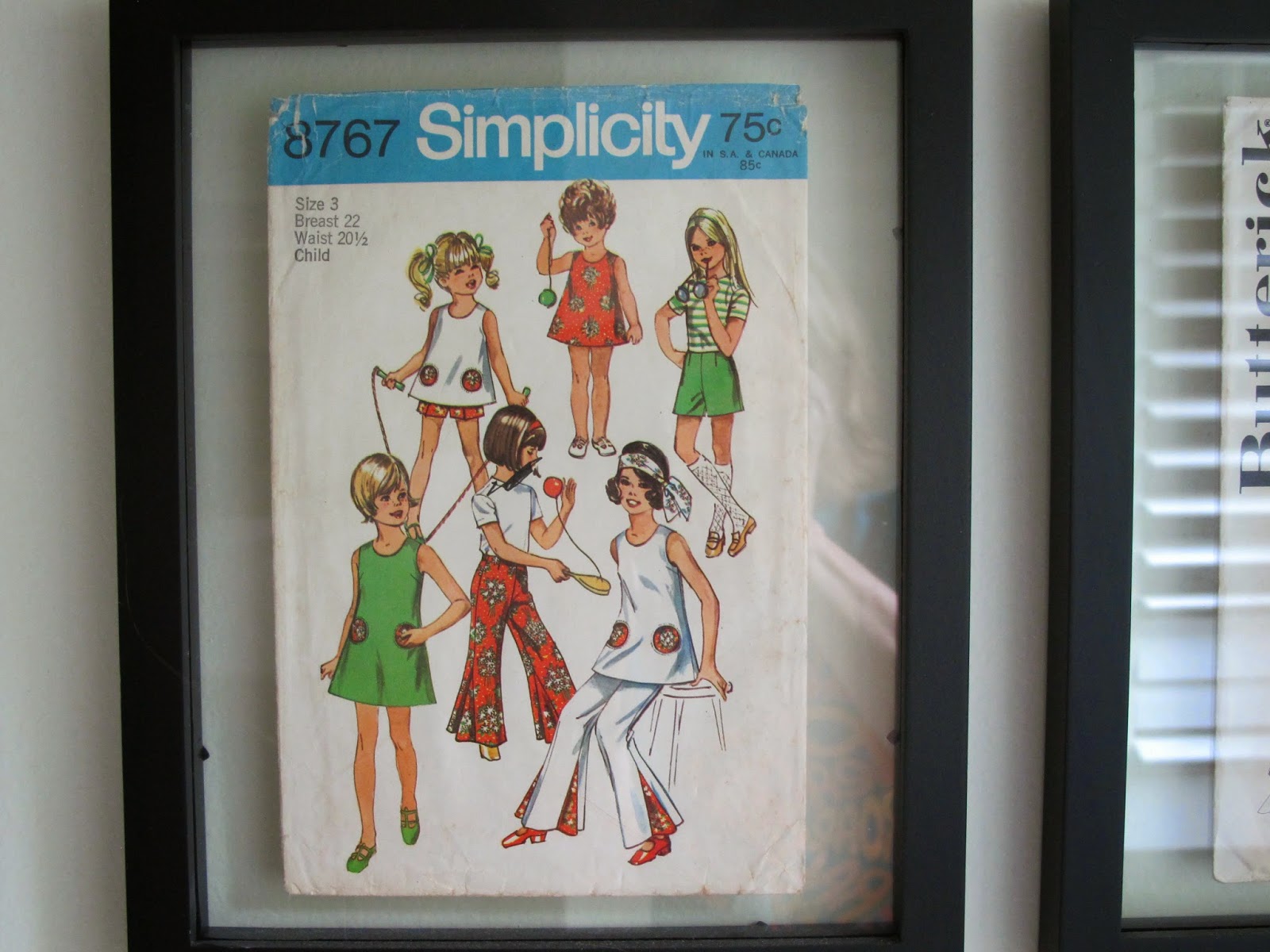 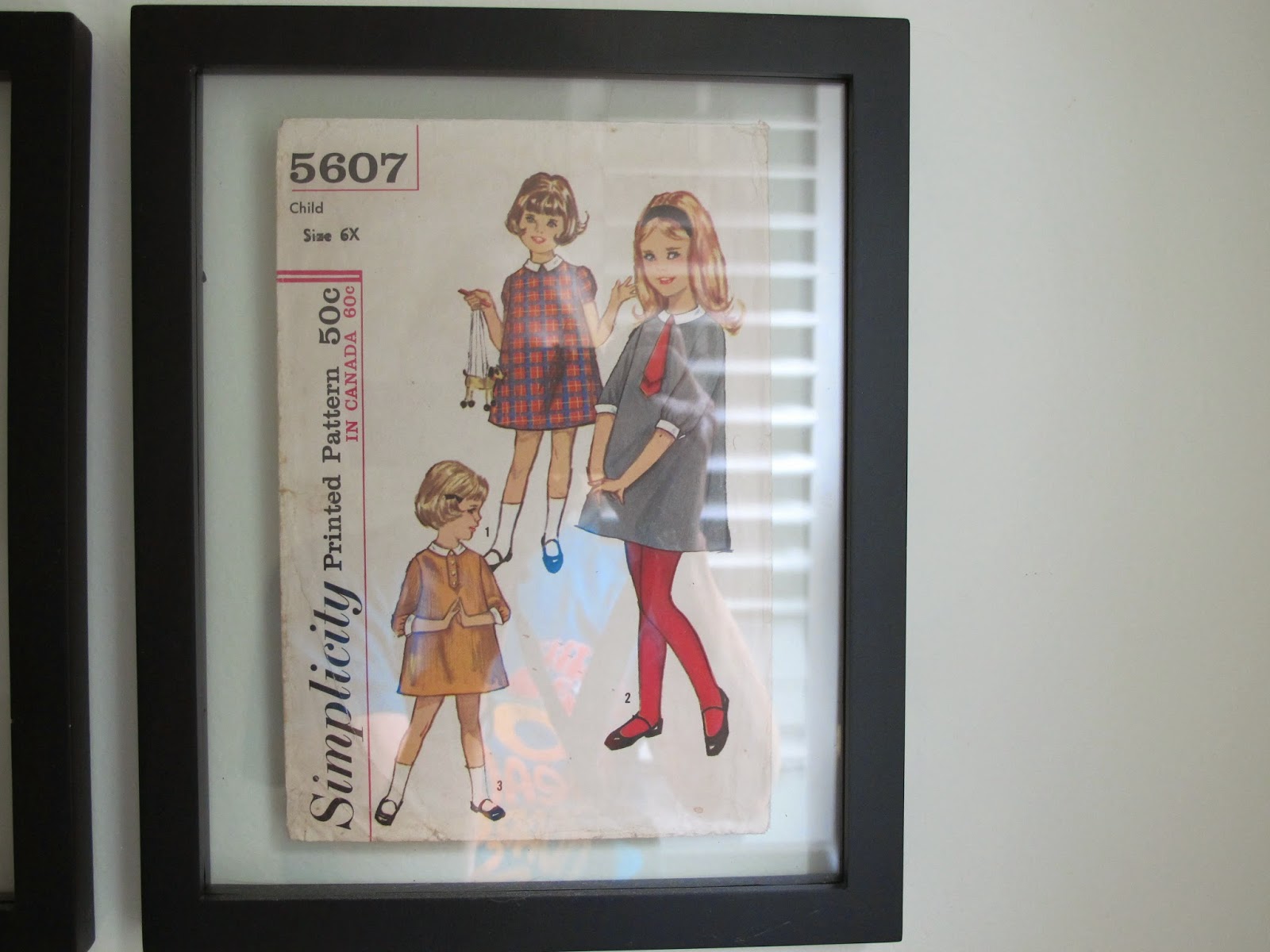 Last fall, my sister came across boxes of fabric and hundreds of patterns packed away in her basement from when we closed my aunts’ three story house in Lynchburg, Virginia, in 1992. 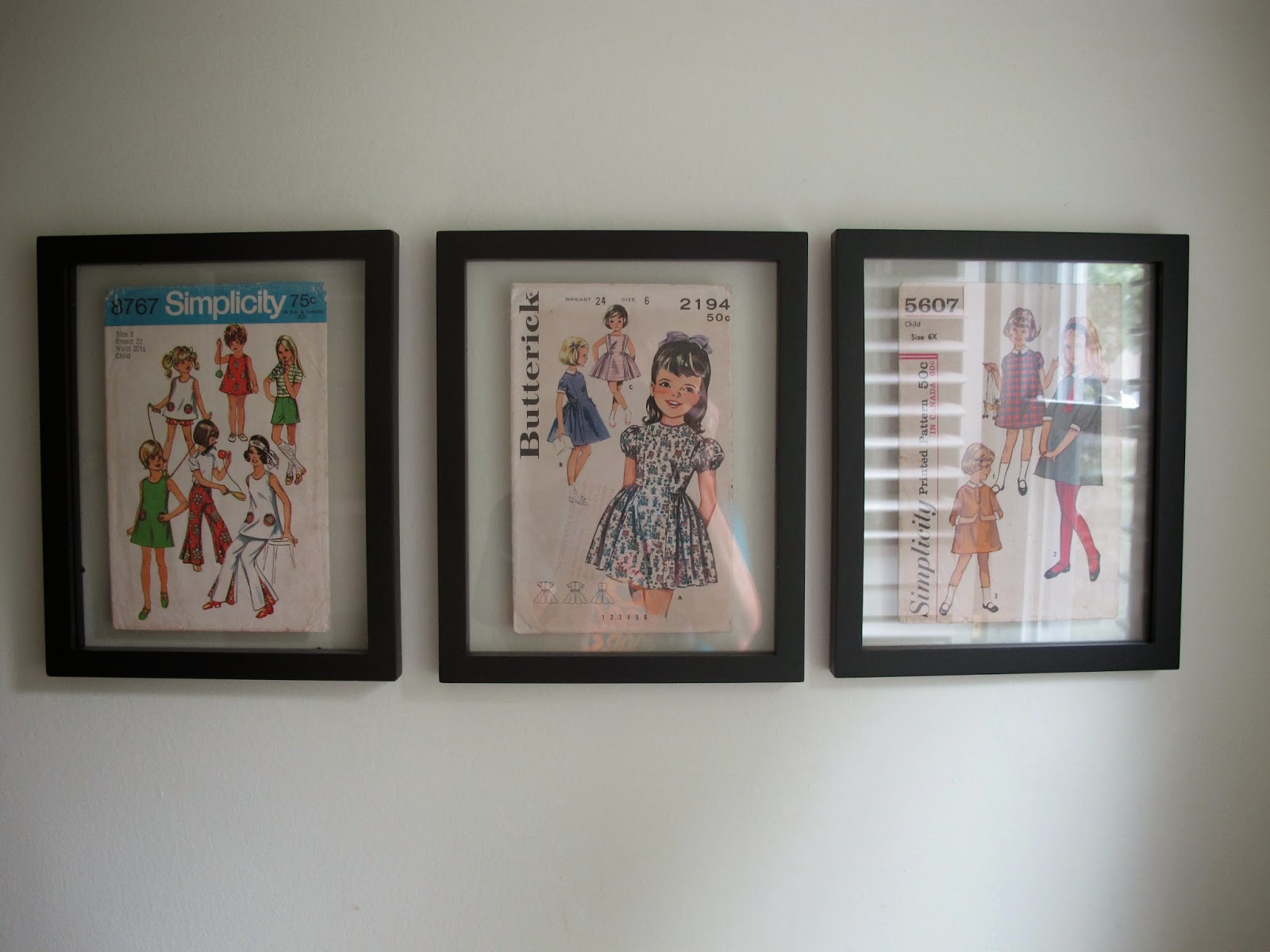 My Aunt Ava died in July of 1991, and Aunt Eleanor, who had shared that house with her for over thirty-four years, delicately declined in health.

In December of 1991, Eleanor fell and broke her hip, and while recovering in the hospital, she grew disoriented, frightened, and confused. My mother recalled a conversation that she had had a year before with Ava about how Eleanor could no longer remember how “to put a collar together.” Neighbors also mentioned to mother later that they had noticed that Eleanor, after Ava’s death, had difficulty with everyday, household chores – like not remembering how to turn off the stove.

Knowing that Eleanor could no longer live by herself,  my mother and Aunt Harriett found a facility for her care, moved her, and then they, my siblings and I began the arduous task of dismantling, parceling out, and estate selling the contents of that house that had been their home since 1957, and to us it was “back home.” 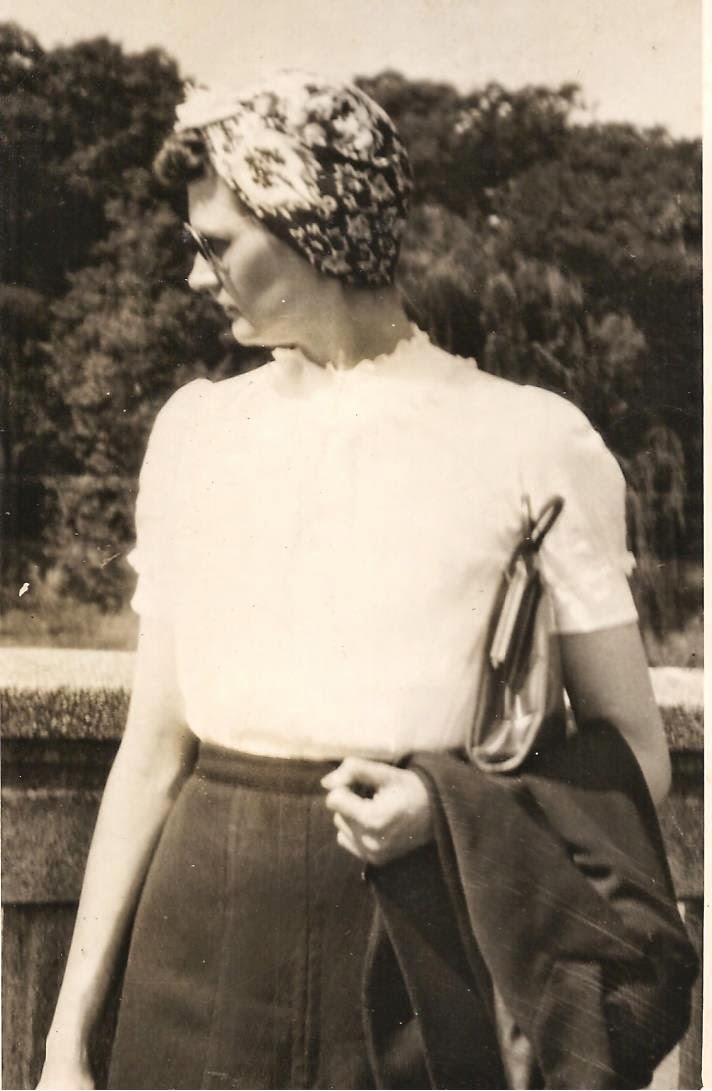 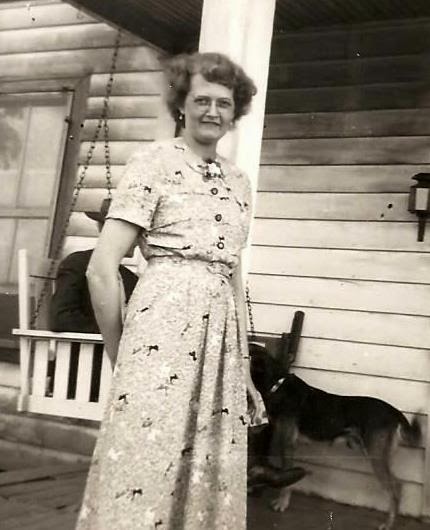 Not only was the house full of the normal stuffing of a household but also the leftovers that they had moved from their own childhood home, Poplar Tree Farm in Appomattox, which included family memorabilia dating back to the mid 1800s.

Traveling to Lynchburg and spending time in that house on Westover Boulevard for Christmas and summer vacations had been a ritual in my family.

I spent time in Virginia in the summers with my maiden aunts from the late 1950s until 1967. Recollections of that house, its contents, and the precious giving nature of my mother’s sisters lie at the forefront of my memories.

My aunts gave liberally to my siblings and me, as we were their only nephews and nieces, and when we were around them, they doted on us as if we were extraordinary.

One of the most precious gifts was Aunt Eleanor’s talent as a seamstress, a talent that she generously shared with her sister, my mother, and her nieces, my sister and me. She also sewed for herself and her four other sisters – Nancy, Ava, Harriett, and Lois. 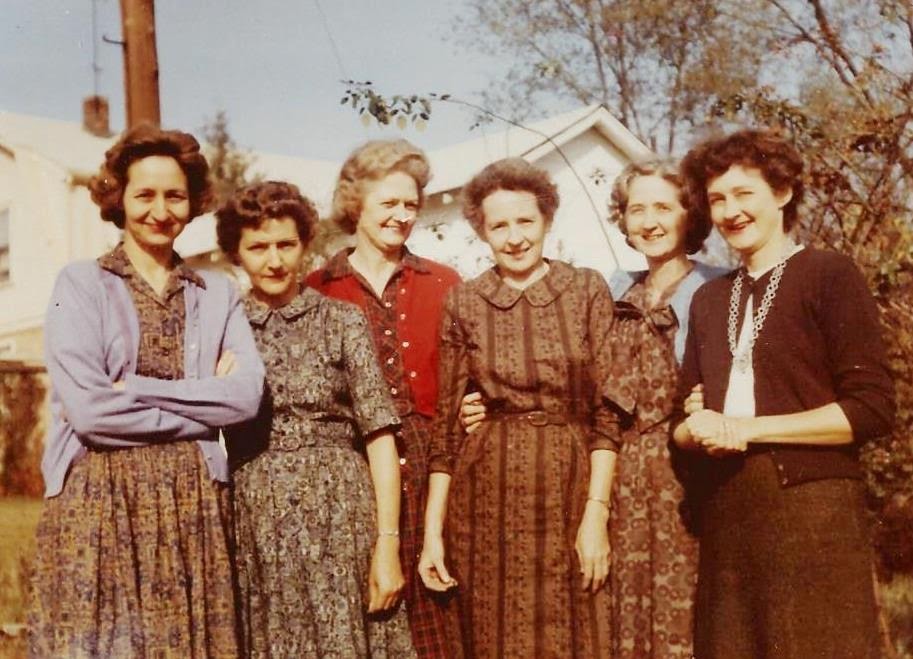 A perfectionist, Eleanor got exact measurements and altered patterns to fit precisely. My sister Margaret, tall for her age, would have had some trouble fitting in the sizes of ready-made clothes. Aunt Eleanor custom-made her dresses, night gowns, shorts, tops, and one time a suit that fit her perfectly.  A lot of the time, she matched my clothes to my sister’s, knowing that anything she made her, she had to make me, or I might, I don’t know – throw a fit. 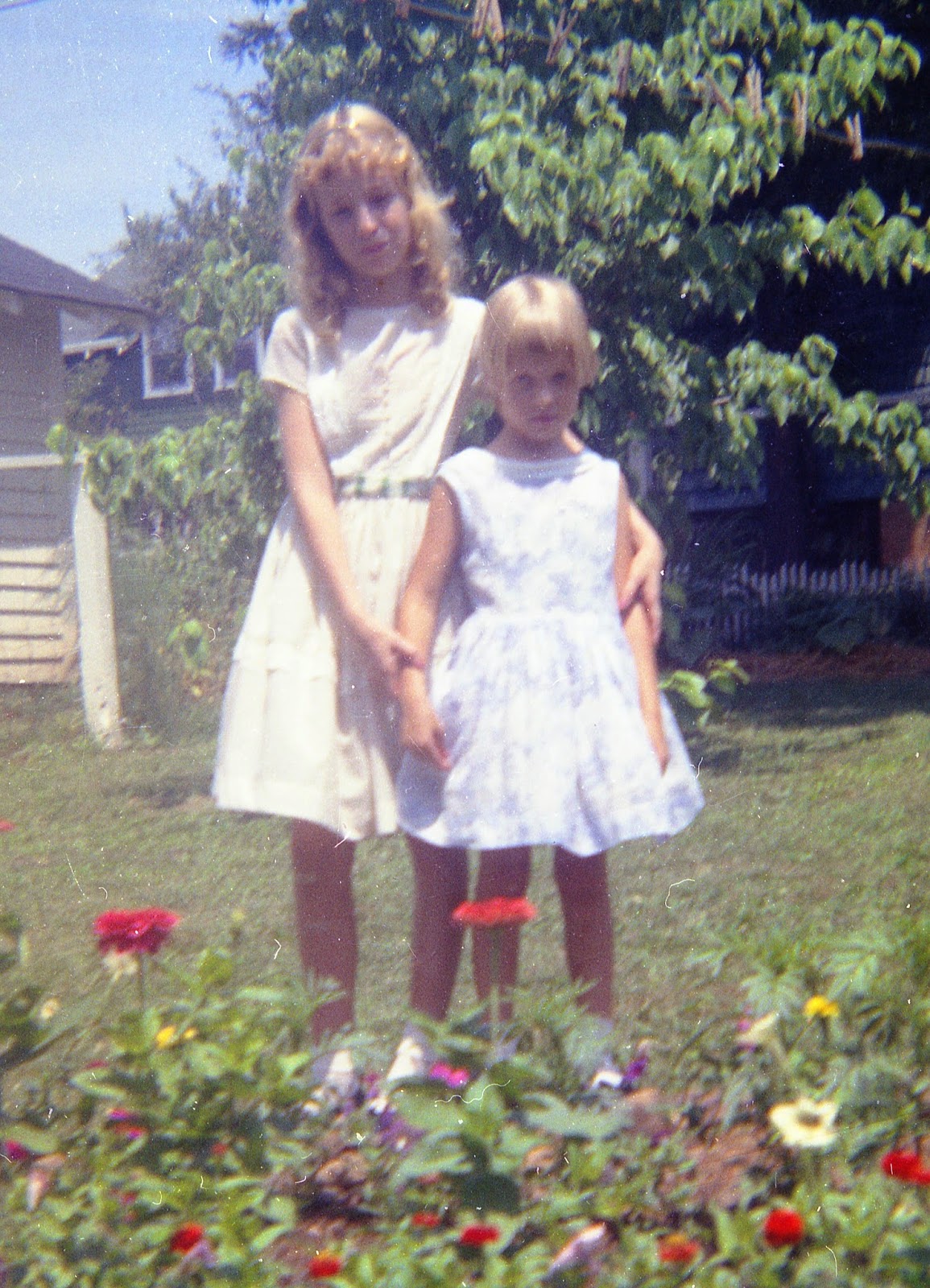 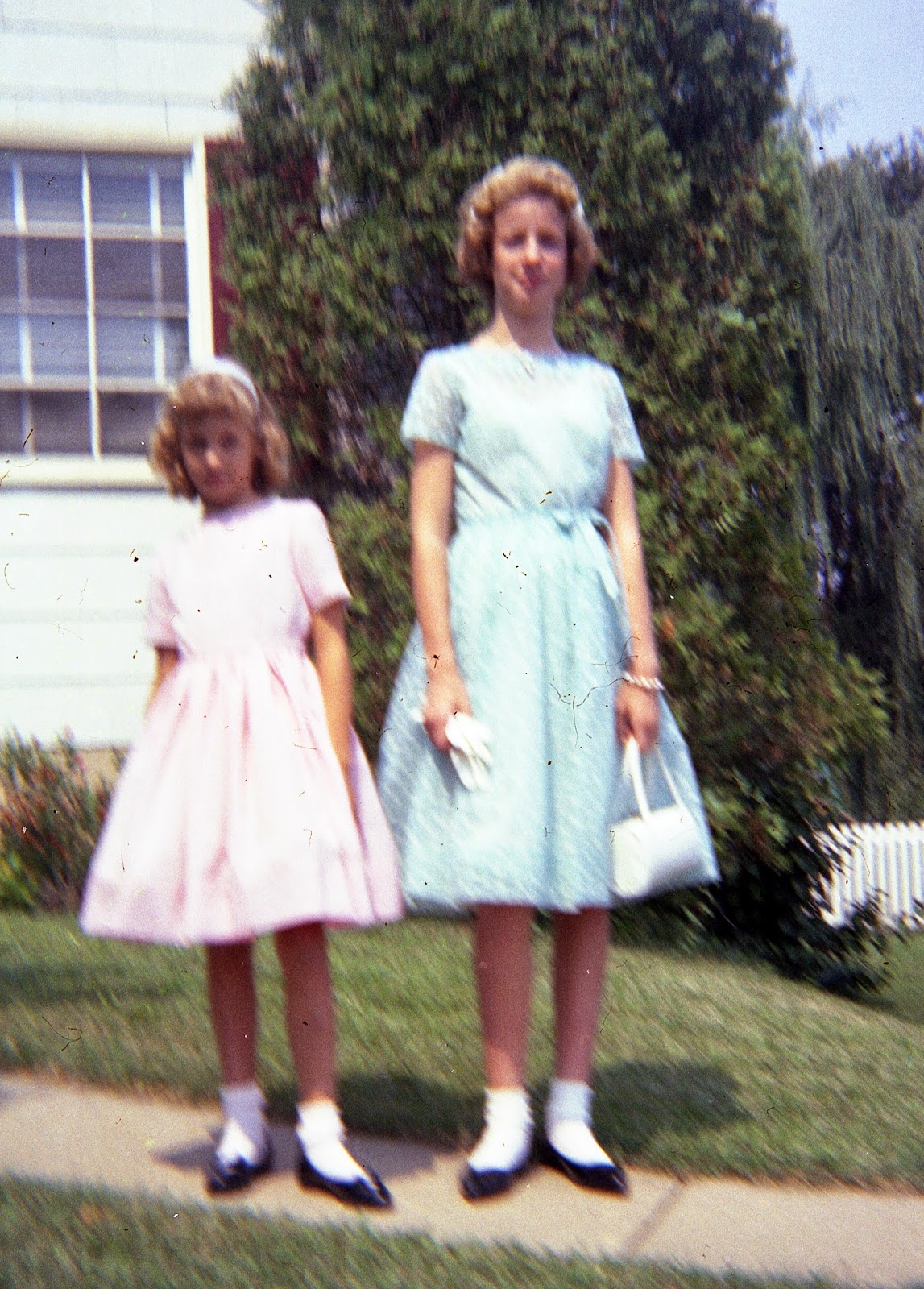 A favorite custom-designed piece, which she made for both Margaret and me each Christmas, was a flannel nightgown that ended perfectly at the top of our feet. {I grew tall myself and wore those gowns until my early 30s.} Several years ago, I came across one of those nightgowns, folded in a bottom drawer, that I had lovingly saved. I touched the well-worn material, my eyes welling with tears, as I thought of Aunt Eleanor.

Here in Atlanta, anytime we received a package, wrapped in brown paper and tied with white string and addressed to “The McDaniels” in Eleanor’s neat handwriting, we wriggled with excitement at the thought of what she’d made.

For years Eleanor picked out the patterns, but as my sister and I aged and cared a little more, she allowed us to pick out the style. Once we had done that, we wrote a letter and included the maker of the pattern, Simplicity, McCalls, or Butterick, [as I recall, she wasn’t much of a fan of Butterick], and the number. A couple of weeks later, our customized outfit would arrive in the mail.

Aunt Eleanor sewed, and she did so beautifully.

When I spent time in Lynchburg in the summers, Aunts Eleanor and Ava would take me to the fabric store at Pittman Plaza, a u-shaped grouping of stores within walking distance of their house on Westover. There in the store, I flipped through the oversized books of patterns, trailed my hands along bolts of polyester and cotton, studied ric-rac, buttons, and lace, and dreamed of the fashion that Aunt Eleanor created. 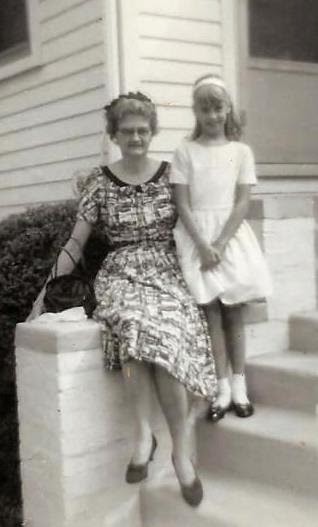 In her upstairs bedroom, Aunt Eleanor laid a cardboard pattern sewing cutting board across her double bed, placed the tissue pattern pieces on it, and painstakingly and flawlessly cut the pattern.  Then with straight pins, she pinned the pattern piece to the fabric and cut again with precision.

At night with the light of a single bulb of her gold, cast iron, gooseneck, adjustable desk lamp, she bent over the work at her Singer cabinet sewing machine and sewed.

I slept on a single bed in her bedroom, and I have a distinct memory of her silhouette, after sending me to bed, humped over her sewing into the late hours.  She lovingly and selflessly did this for us after having worked a full day as a beautician. 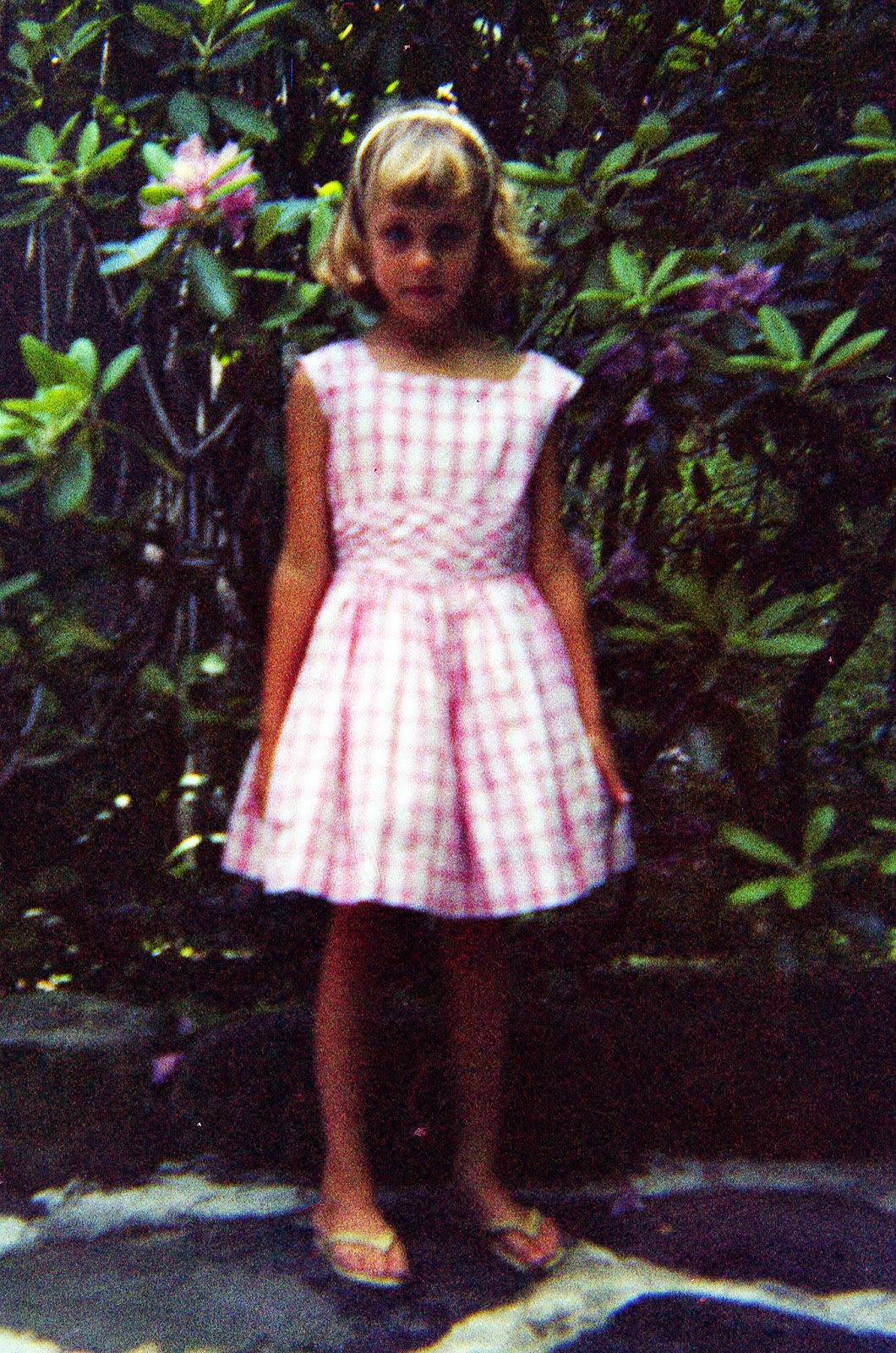 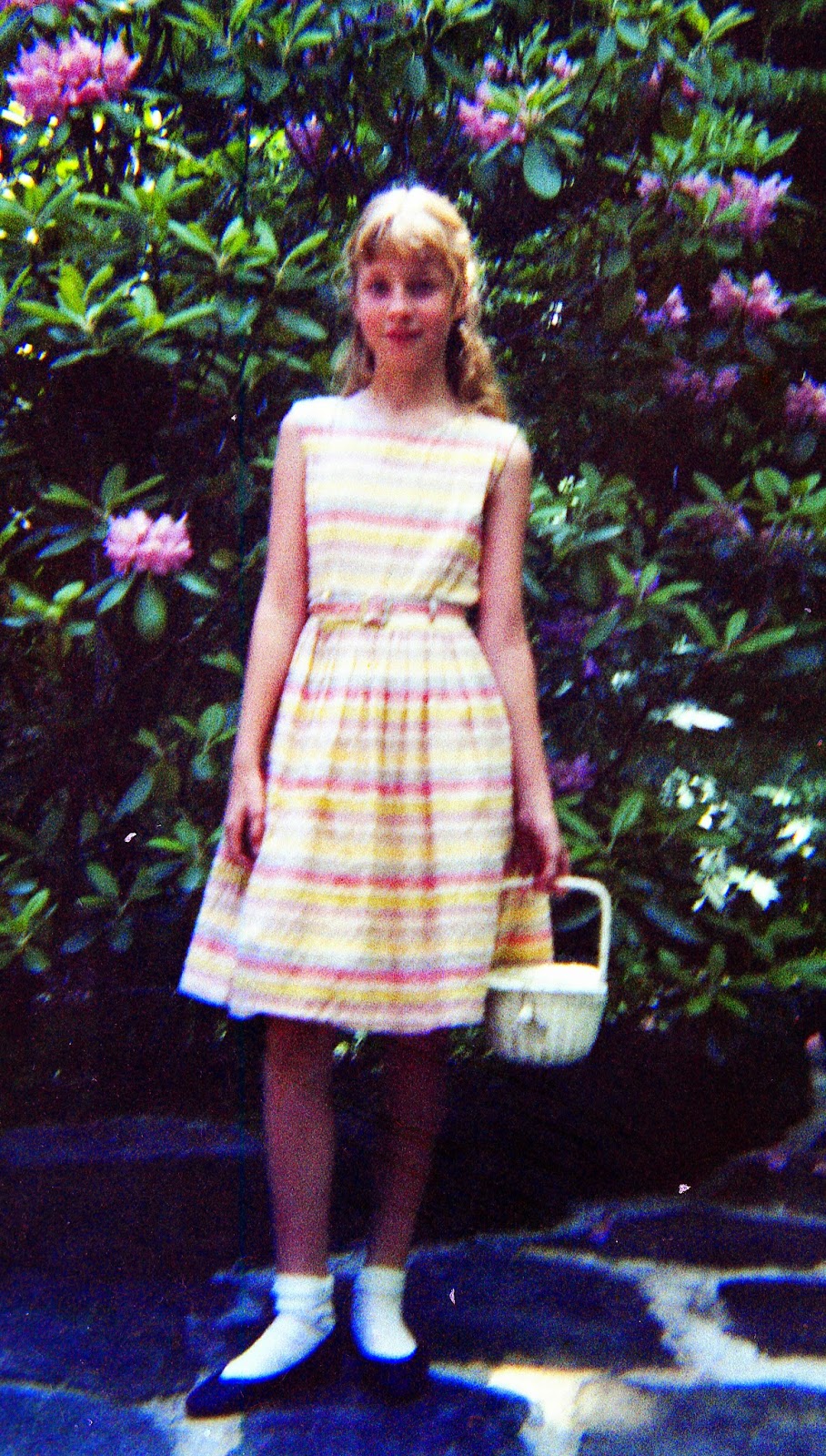 In the evenings, she sat in her chair in the living room and stitched or hemmed or crochet or pieced quilts as she and Ava watched Lawrence Welk or Perry Mason on their RCA television. Her hands never were in the devil’s workshop…

Her buttonholes round, her pockets, seams, zippers, and darts flat, her hems even, her hook and eye lined up perfectly,  she did gorgeous work – and the clothes fit.

One story about Eleanor and her sewing that I heard only as an adult was about my mother’s wedding dress. My father asked my mother to marry him in March of 1948 and planned their wedding for June.

My mother, of course, asked Eleanor to sew her dress. Into the project, Eleanor determined that it was “too much,” and another seamstress stepped in to finish what Eleanor had started. In retrospect, I imagine that Eleanor, who would not settle for anything less than perfect, put herself under too much pressure. I ache now to think of how hard that must have been for her to tell my mother that she couldn’t do it.

Sweet Aunt Eleanor, the second oldest of my mother’s sisters, quietly and sacrificially gave much to my family. 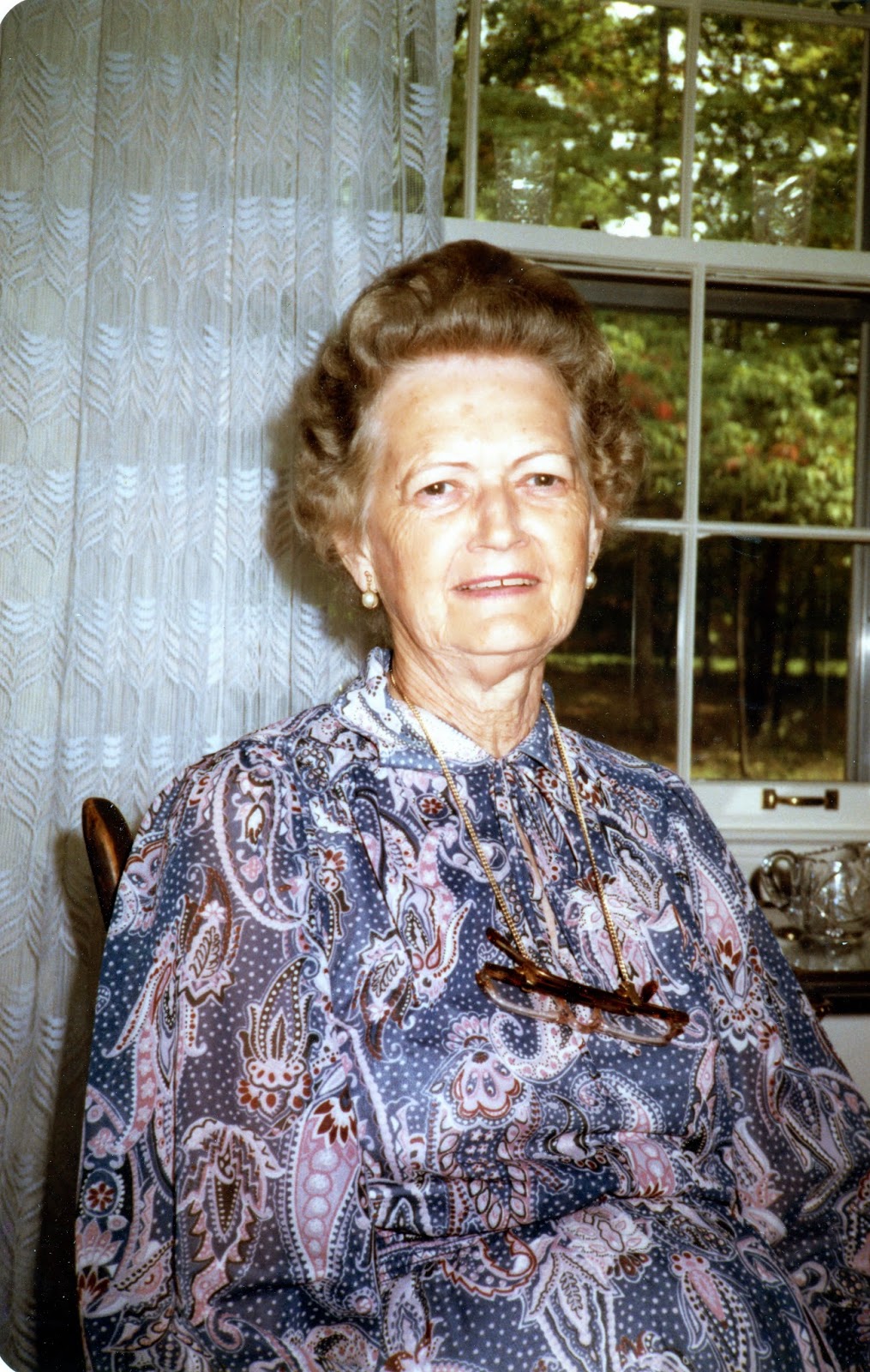 Aunt Eleanor, 1981
When my siblings began to have children of their own, Eleanor made each of her grand nieces and nephews quilts, and had she lived long enough, she’d made them more. 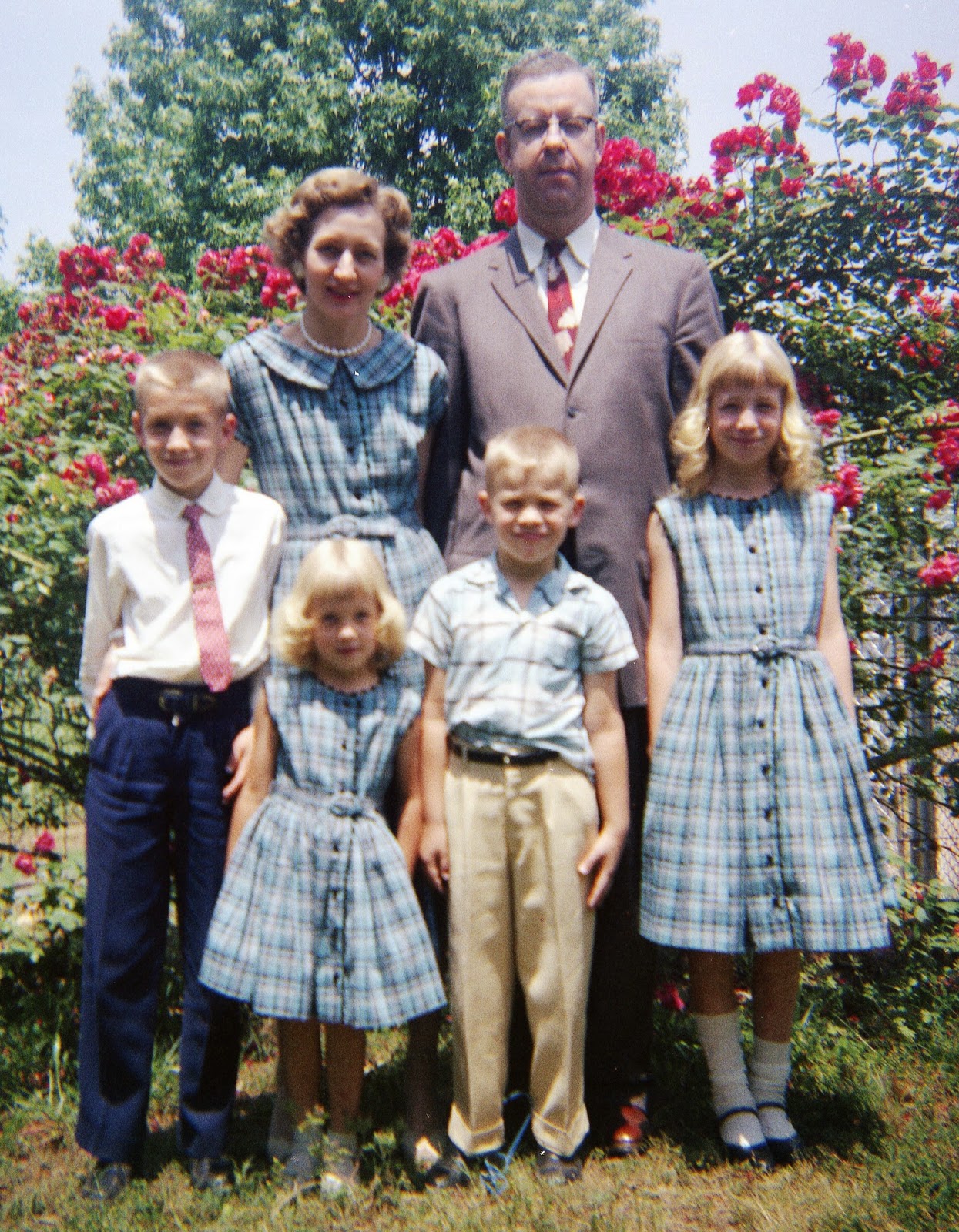 I mean, how cute are we? 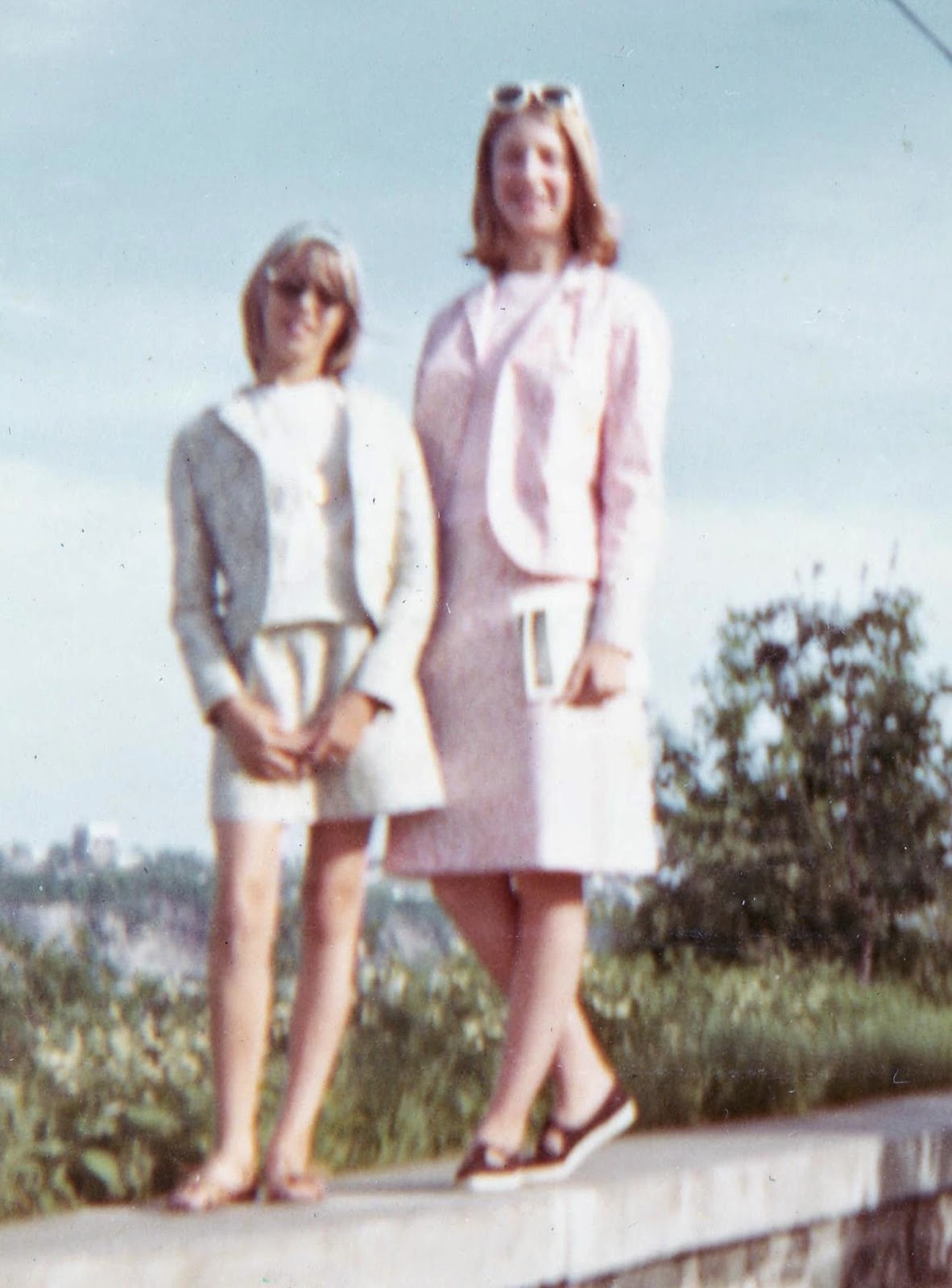 and here we are in our 1967 matching suits -- obviously, I had rebelliously rolled my skirt.