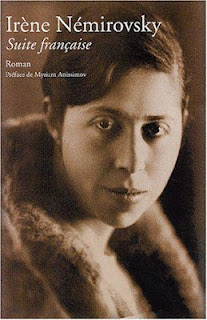 Suite Francaise by Ukrainian-born Irene Nemirovsky is yet another novel written about World War II, [and as I told my nieces as I chatted with them on Skype recently -- “I need a break from Holocaust fiction”], but this book interested me two fold: its author and that it's incomplete.

Blog readers: You read a book knowing that it was incomplete?

Neimirovsky’s wealthy banking family emigrated to France during the Russian Revolution.  After she attended the Sorbonne, she began a writing career that quickly turned to success. In the early 1940s, she began work on what would become Suite Francaise -- the first two parts of a planned five part novel --  and “dreamed of a book of a thousand pages, constructed like a symphony, but in five sections, according to the rhythm and tone.” While she and her husband remained in Paris, they hid their two young daughters in a small village in central France in a “vain attempt to elude the Nazis.”

The first section of Suite Francaise, “A Storm in June,” begins in 1940 as the Nazis invade France. Parisians, from all walks of life and in different levels of panic, attempt to get out of the city and into the country in order to survive. The interactions between the classes as well as the selfishness that surfaces interweave as Neimirovsky portrays the fear of the individual as he walks away from all he has known, obviously a situation in which Neimirovsky herself had a front row seat and well narrated from a third person point of view.

“Dolce,” the second part, shows the conflicted and complex lives of a German occupied village in France. As the German army set up their officers and soldiers in private homes, the relations between the aristocrats and their neighbors and the merchants and their customers escalate into an atmosphere full of suspicion and jealously as well as a network of resistance and compliance.  Neimirovsky again writes with the details and precision of someone who knew this experience well.

When I finished “Dolce,” I wished for the other three sections, but at the end of the novel, the translator provided an appendix with Nemirovsky’s hand written notes on the situation in France and her plans for the rest of the novel, taken from her notebook. Not as satisfying as the work would have been maybe, but her notes were chilling as she “denounced fear, cowardice, acceptance of humiliation, of persecution and massacre.” These notes eerily illustrate how she willed to stand up and put in writing what she called ‘the state of France.” Like so many others, her life snuffed out, the painful awareness of the horror of that time comes to life yet again in the personal, intimate notations made by Nemirovsky.

Arrested in 1942, Jewish  writer Irene Nemirovksy would die at Auschwitz, her book unfinished. Her husband would suffer the same fate, but her daughters, protected by a network, took the manuscript into hiding. The novel finally was published in 2006, sixty-four years after her death.